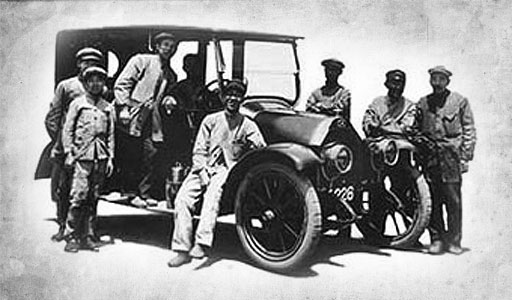 Mitsubishi Motors automotive tradition goes back to 1917 when the Mitsubishi Model A, Japans first series-production automobile, was introduced. Over the next two decades the company established themselves as an innovator, developing, amongst others, Japans first diesel engine, its first large-sized bus (the start of the world famous Fuso commercial vehicle series), its first four-wheel drive passenger car prototype, and its first diesel-powered truck.

At the end of the Second World War Japans large industrial groups were dismantled by order of the Allied powers and Mitsubishi Heavy Industries was split into three regional companies, each with an involvement in motor vehicle development. The country’s major need at this time was for commercial vehicles, the situation being further complicated during the first few years by a severe fuel shortage. 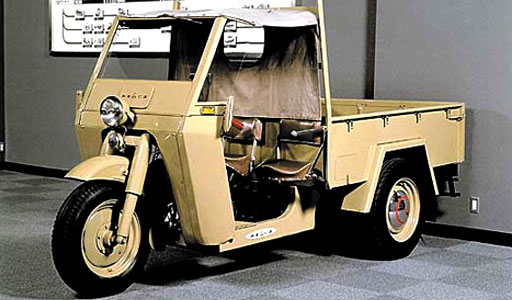 In consequence 1946 saw the introduction of a bus which could be run on either petrol or alternative fuels, and, in 1947, an electric bus; in the truck field the innovations continued with Japans first truck to be equipped with an air suspension system, as well as the first tilt-cab truck. Passenger vehicle production was confined primarily to Mitsubishi’s first scooter.

By the beginning of the 1960s, however, Japans economy was gearing up: wages were rising and the idea of family motoring was taking off. The Mitsubishi 500, a mass market saloon, fulfilled this need; followed, in 1962, by a four-seater micro-compact with a two-stroke air-cooled 359cc engine, the Minica – a name which still lives today. The first Colt -a larger, more comfortable family car, not a predecessor of the modern Colt – was also introduced in the same year, and the first Galant in 1969. This was a genuine pacesetter in the Japanese market, representing the best and latest in automotive technology and was to sire a long and illustrious line with a string of motor sports honours and consumer awards to its name.

With similar growth in its commercial vehicle production it was decided that the company should create a single operation to focus on the automotive industry and, in 1970, the Mitsubishi Motors Corporation (MMC) was formed.

The 1970s saw the beginning of Mitsubishis considerable international rallying success with Galants and Lancers, demonstrating the qualities of performance and reliability for which they are known today. As part of a global expansion programme in 1974 UK distribution was ensured with the formation of The Colt Car Company, a joint venture between the Mitsubishi Corporation and Colt Automotive Limited.

By the end of the decade Mitsubishi vehicles were picking up honours both at home and abroad, including South Africa’s 1977 Car of the Year (the Galant) and 1979 USA's pick-up of the Year (the L200). But this was just the start. In 1982 the Shogun (named Pajero or Montero in other parts of the world) was launched, a 4×4 which was quite different from anything that had been seen before.

Quite incredibly, just a few months later in the Paris-Dakar rally, it took honours in the Production Class and the Marathon Class, as well as the Best Team award. Two years later it won outright and a legend was born. The Shogun became a global best-seller, winning 4×4 of the Year awards in Britain, France, Australia, Spain and West Germany. And it was not alone on the honours list – Galants, Colts, Lancers and L200s were all being honoured worldwide.

Throughout the 1990s the Shogun continued to dominate rally events like the Dakar, and Mitsubishi vehicles also began to make their mark on the World Rally Championships. By the end of the century Tommi Makinen in a Lancer had won the Championship an historic four consecutive times whilst Lancers totally dominated the Group N Championships – for vehicles which are basically showroom standard. Technologically this decade saw incredible advances. In 1990 MMC introduced the worlds first Traction Control System, followed by Super Select 4WD and Multi-mode ABS in 1991 and INVECS in 1992. Commercial production of the Libero electric car began in 1994 whilst 1996 saw the development of the GDI engine. 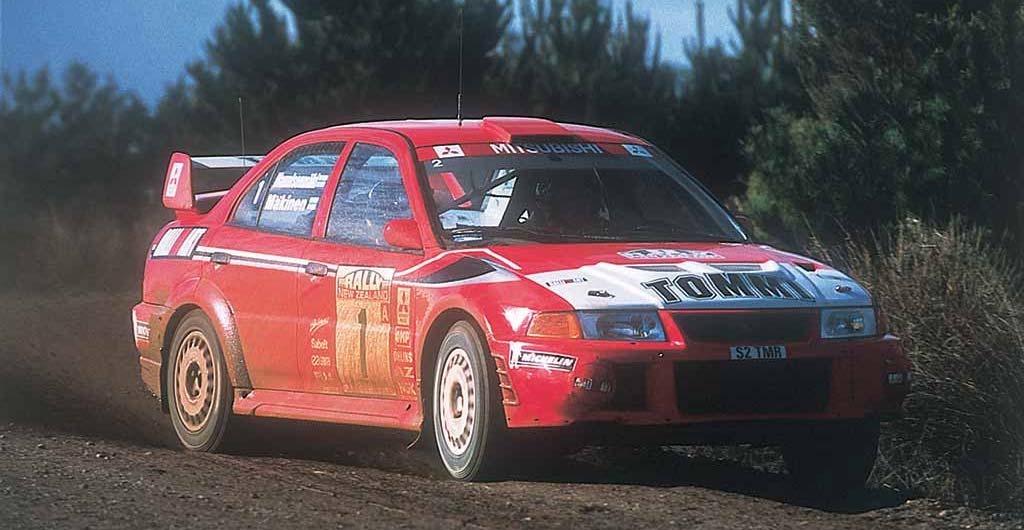 Overseas production expansion was attained with the first Carismas rolling off the line at NedCar, Holland in 1995 – a joint venture between MMC, Volvo and the Dutch government – as well as the opening of production lines in Australia and Thailand. NedCar became a wholly owned MMC facility within a year.

Mitsubishi in the New Millennium

In terms of motor-sport, the strength of Mitsubishis 4×4 heritage was yet again demonstrated by a record breaking 12th victory in the 2007 Dakar rally – the seventh successive victory for the Japanese manufacturer. Today, MMC has manufacturing facilities in over 30 countries and its sales and after-sales organisation is present in more than 170 countries.

In 2004 Daimler Chrysler’s stake in MMC was sold to the Mitsubishi Family (comprising of Mitsubishi Corporation, Mitsubishi Heavy Industries and the Bank of Tokyo Mitsubishi). However, MMC and Daimler Chrysler have maintained a successful business relationship and continue to share B and C segment platforms and engines.

In 2002, Mitsubishi Motors Europe (MME) was established in order to coordinate sales and after-sales specifically for the European market. European product revival started with the Colt in 2004 and subsequently the Grandis, Lancer Evolution IX, new L200 and Colt CZC Cabriolet joined the range.

In 2007 the full product line-up transformation was further developed with the introduction of the all new Outlander and revised Shogun. 2008 saw the introduction of the all new Lancer, Lancer Sportback and facelifted Colt. The Japanese specification pure- electric i-MiEV was launched in Europe to be used in government trials in 2009, with the EU specification vehicle arrived a year later in 2010. Mitsubishi Motors Europe still exists as an after-sales and PR operation to assist European distributors.

The Colt Car Company Limited (Mitsubishi Motors in the UK) was established as the sole UK distributor in 1974. Subsequently, and as a sister company to Colt, a specialist wholesale dealer finance company, Spitalgate Dealer Services Ltd. was established, Spitalgate now also operates MCM which is engaged in promoting sales of Mitsubishi vehicles on contract hire. Colt also has a minority stake in Shogun Finance Ltd. which provides retail finance to customers. At present Colt has a comprehensive network of franchised Mitsubishi Motors dealerships throughout the UK.

Prior to the end of import quotas in 1996 average annual sales were around 10,000 units, with a high mix of 4x4s and in 2000 a new management team took over. A new strategy was implemented for fleet business, product and pricing and new terms for dealers. Mitsubishi soon became the fastest growing Japanese marque in the UK and annual sales more than doubled between the years 2000-2005.

The Managing Director of the UK operation is Lance Bradley who joined the Company in July 2000. He was originally appointed as General Manager – Sales Operations and was promoted to Sales & Marketing Director in October 2001 with responsibility for Vehicle Sales, Marketing, Product Planning, Press & Public Affairs, Network Development and Business Management before taking the role of Managing Director in April 2009.

The number one selling Mitsubishi vehicle in the UK in recent years has been the L200 pick-up. The L200 drove forward the success of Mitsubishi in the pick-up segment in the UK, remaining the retail market leader for over 10 years. The i-MiEV was, and is, an important vehicle for Mitsubishi and made a statement back in 2009 to the global car industry as the very first mass-produced, zero emission full electric vehicle ever. Mitsubishi continually strengthen and refresh our product line-up with the introduction of new and innovative products such as the ASX crossover vehicle launched in 2010, the compact Mirage and the all-new Outlander both launched in 2013 and the PHEV version of this Outlander will be Mitsubishi Motors’ first EV-based, Plug-in Hybrid, drawing on our extensive electronic know-how and 4-Wheel-Drive expertise.

With a strong management team and a host of exciting new products on the horizon, Mitsubishi Motors in the UK are in an excellent position to build on past successes in an increasingly challenging marketplace.

The Future for Mitsubishi Motors in the UK

Lance Bradley, Mitsubishi Motors in the UK’s current Managing Director, joined the company in July 2000 from Ford of Great Britain where he spent 12 years in a variety of sales and operational roles. Originally appointed as General Manager – Sales Operations, he was promoted to Sales and Marketing Director in October 2001 with responsibility for Vehicle Sales, Marketing, Product Planning, Press and Public Affairs, Network Development and Business Management. In April 2009 he was promoted to the role of Managing Director with responsibility for the overall direction of Mitsubishi Motors in the UK. Lance is also Member of the Board of Spitalgate Dealer Services.

A key focus for the UK has been on Mitsubishi’s dealer network and its profitability. Recent figures reveal that the Mitsubishi franchise in the UK is in a very healthy state with dealer profitability in 2010 recorded as the best in the company’s history, and that 2011 has continued with the same strong performance. It is no surprise, therefore, that the brand is continuing to expand its successful network of UK dealers with several other exciting new dealer prospects waiting to join the franchise.

The pure-electric i-MiEV is just one important part of the equation. With its zero emissions it will help drive down our – and our customers' – carbon footprint while contributing to cleaner air in our towns and cities, with health and environmental benefits for all. Mitsubishi are always looking to reduce tail-pipe emissions on their conventional engine vehicles too as well as using recycled plastics and bamboo resin where possible! The introduction of plug-in hybrid technology in 2012 will strengthen their credentials even further. 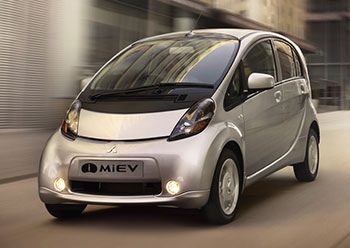 Mitsubishi Motors in the UK’s whole philosophy – which drives everything they do – is based on the Japanese ‘kaizen’ principle of constant evolution and improvement. It is borne out of a desire to never rest, to never accept the status quo, to never accept the thought that we have ever achieved enough.

So, for Mitsubishi Motors in the UK, “Intelligent Motion” is a fitting banner under which they can place so much of what they do, and how they do it.

Another key focus for the Management team at Mitsubishi Motors in the UK has been on ‘Excellent Service’. All of the most successful brands have a key point of differentiation like the cheapest product or the biggest sales volume. As a 1% market share manufacturer in the UK, Mitsubishi Motors recognise that their key point of differentiation is to provide all of their customers, staff and associates with Excellent Service. Therefore, this is a priority for Mitsubishi today and moving forwards.